hide
hide
No announcements have been posted yet for Synchro Belles.

The Belles rocked California at nationals…
Here is how amazing our girls did.

What an amazing job these girls did.
We are all so very proud of them!
You can find all the scores on USA synchro
2013 Age Group Nationals

. The basic job of a synchro parent (who is not volunteering) at a meet is to cheer for the swimmers.

. Non-working parents must NOT be on deck at any time. Parents may bring their swimmers to their coach to get them settled upon arrival but should leave the deck immediately after doing so. Please do not put coaches, board members, officials, and other meet workers in the uncomfortable position of having to ask you to leave the deck.

. Remember that coaches line the girls up to swim. Parents should be in the designated spectator seating area. Do not leave the stands to go to your daughter unless the coach has asked you to be there.

. Parents should NEVER enter the deck to talk to a coach during a meet. See your team mom or a board member if necessary. Otherwise, send your coach an email and schedule a meeting.

. Respect all coaching decisions. Yes, changes may be made to your daughter’s routine at the last minute. That is part of the sport. Do not stress. Relax, the girls will be fine. So will you! :)

Abide by the host team’s rules. (Read the meet info sheet carefully.) Example: If it is stated that coolers are NOT to be brought into the meet, do Not bring a cooler in, even if it is a small one. If you need to bring your own food in a cooler, keep the cooler in your car and visit it when necessary. We must be a good example to our girls and to the teams around us.

Appropriate Applause
Applause and cheering is appropriate during routines. Do not be excessive, the girls need to be able to hear their music.

Sportsmanship
Excellent displays of sportsmanship are expected by both swimmers and parents even when one is disappointed by the results. Be gracious when winning and losing. Congratulate swimmers from other teams.

Video Recording
It is acceptable to record your own swimmer at the meet. However, it is inappropriate and completely unacceptable to record other teams’ routines. The Belles have had routines copied and stolen by other teams in the past, and we do not want to give the perception that our team engages in these under-handed tactics.

It is extremely important that parents and swimmers display sportsmanship during awards ceremonies. It is NEVER acceptable to cheer (scream, hoot, holler) because another team has been announced as a winner indicating your swimmer has received a higher place. ALWAYS wait to excitedly cheer AFTER the Belles have been announced. (Example….the second place team has been announced. Belles parents start screaming before the first place team is announced because they know that their daughters won first place. We know parents and swimmers get excited, but this type of behavior is rude and highly offensive to participating swimmers and parents.)

. The goal is for ALL synchronized swimmers to have fun. Let’s all support them in a way that positively reflects the Belles to all teams, officials and spectators. 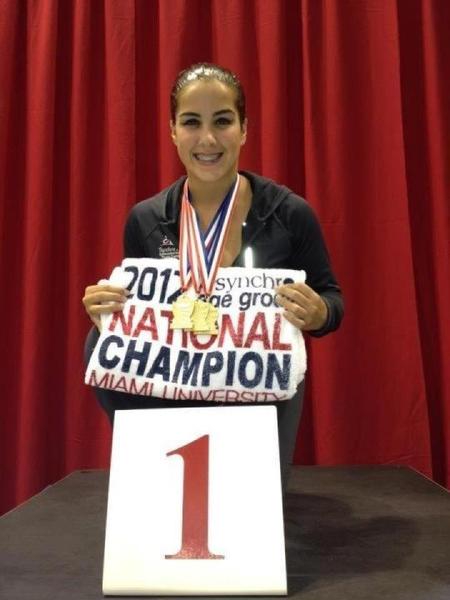 Carolyne Vasconcellos had the Midas Touch at the eSynchro National Championships in Oxford, Ohio. Every event she competed in, resulted in gold. Carolyne earned the top spots in figures, trio and solo. We are very proud of our Belle and wish her the best as she starts a new synchro career with the Cardinals at Incarnate Word in Texas.

Emily Petkovsek, Carrie Hartnett & Carolyne Vasconcellos defended their title as the best synchronized swimming trio in the nation at the eSynchro National Championships in Oxford, Ohio. They brought home the gold once again! Emily & Carrie also earned 4th place with their duet.